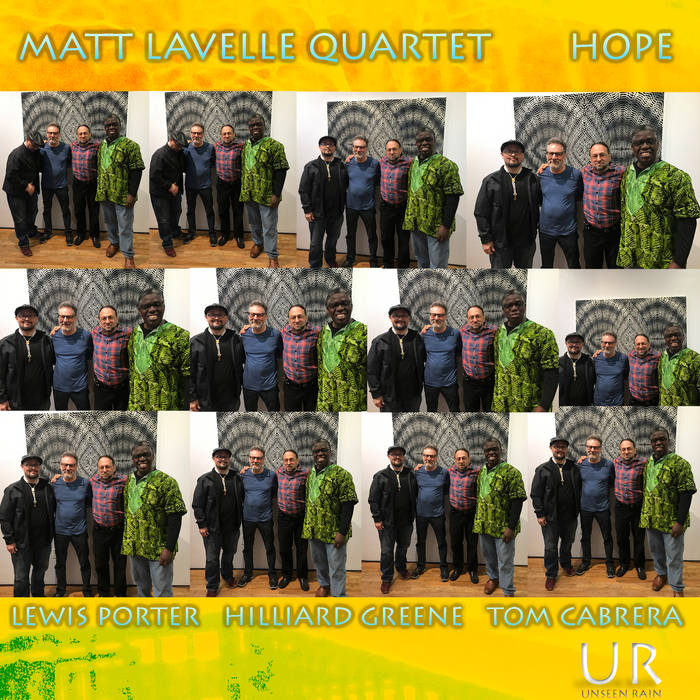 Tachymètre The MLQ move forward on their 2nd. They sound relaxed, focused and simply like they’re enjoying themselves, with tunes that have ample space and time for each voice to be heard. I didn’t think they’d top album #1...so glad I was wrong. Favorite track: Trayvon Martin.

Matt Lavelle is a difficult musician to pigeonhole. While perhaps best known for his work with some of the giants of the New York avant-garde, he is also a melodic and swinging player whose favorite role models of the past include Duke Ellington trumpeters Cootie Williams, Ray Nance and Clark Terry. And while he has been a dedicated trumpeter (and flugelhornist) for decades, he has also developed distinct voices on alto clarinet (being a pioneer on that neglected instrument) and bass clarinet.

Matt is enthusiastic about the musicians on Hope, each of whom had been part of his previous recording for Unseen Rain. “This group is unique in that a lot of the power comes from Hilliard Greene’s bass.” Greene’s extensive resume includes a 20-year association with Jimmy Scott, working with Cecil Taylor, and uplifting the music of a vast number of artists, from Rashied Ali to Kenny Barron, James Carter and Dave Douglas to Marlene VerPlanck and even the Inkspots. Drummer Tom Cabrera performs with his wife vocalist Julie Lyon, the Rocco John Quartet, and guitarist Jack DeSalvo in addition to recording with his own group. Dr. Lewis Porter is famous as a scholar who wrote the definitive book on John Coltrane: His Life And Music, but in recent times has been making a strong impression as a pianist. “He is an orchestral and cinematic player who is great at creating soundscapes that could be scenes from a movie."

The six Matt Lavelle compositions that comprise this CD cover a wide range of moods and approaches. “The Sideline” (playing creative music just out of the spotlight) is the place that he considers himself to have been on in NYC since 1995, and the place that Matt hopes to leave with the release of this album. “The Sideline” is a relaxed medium-tempo straight ahead piece that features some of the leader’s warm flugelhorn playing along with Porter’s adventurous piano. “Hope” begins with nearly four minutes of virtuosic solo bass by Greene. The performance also features some highly expressive alto clarinet. “This tune is about having a positive feeling that we will somehow overcome the many problems and adversity that we have today such as Trump and gun violence.”

While being advanced, “Blues for Micio” (named after the shop cat at Michiko Studios in Times Square) also looks back to the past with stop-time breaks, swinging bass playing, and the leader’s use of a derby mute on his trumpet. It’s Harmolodic. Each of the four musicians (with Matt also featured on alto clarinet) have opportunities to shine. “Black And White” received its name from a question that Ornette Coleman posed to Matt: “’The major is white and the minor is black; do you agree?’ Besides referring to the larger struggle of black and white people in America, that statement led to me becoming obsessed with mixing together major and minor chords.” A singalong bass pattern inspires some powerful bass clarinet playing.

“Trayvon Martin,” which starts with Matt’s mournful unaccompanied trumpet before swinging a bit, is a celebration of the person that Trayvon Martin never lived to be. “I always thought that it was the responsibility of the artist to draw attention to what is really happening in America. This piece tries to be positive while also not forgetting the reality. John Coltrane began this tradition with his piece Alabama.” Hope closes optimistically with “Love,” a feature for Lewis Porter that is as tender and mysterious as love itself.

Matt Lavelle grew up in the suburbs of New York City. He began playing trumpet early on although he was in high school before he learned about jazz. “I heard a live recording of Joe Williams with the Count Basie Orchestra performing ‘Work Song’ and that was it for me; I was converted for the rest of my life.” His first mentor was Hildred Humphries, a swing era veteran who had toured with Billie Holiday and worked with Count Basie. “After that I had ten years as a sideman with some hardcore free players, so I went from one extreme to another; during that period Sabir Mateen became my second mentor. When I began studying with Ornette Coleman in 2005, he really helped me put all of the stuff I had experienced together.”

Among the highlights of Matt Lavelle’s career so far have been working with Sabir Mateen since 2002, being a 7 year member of late guitarist Bern Nix’s quartet, recording with Giuseppi Logan in 2010, leading his 12 Houses Orchestra since 2011, working with William Parker and Julian Priester, publishing two books (New York City Subway Dreams And Beyond and The Jazz Musician’s Tarot Deck), and recording several albums as a leader including one called Harmolodic Monk.

Along with personal goals such as wanting to lead his group someday at the Village Vanguard, Matt Lavelle hopes to do for the alto clarinet what Eric Dolphy did for the bass clarinet. “The alto clarinet has been cast aside in both the jazz and classical worlds. It really has its own sound that has not been fully explored.”

A unique musician with a bright future and a strong vision, Matt Lavelle along with his musicians are in top form throughout Hope.


Scott Yanow, jazz journalist/historian and author of 11 books including Jazz On Record 1917-76 and Trumpet Kings

Bandcamp Daily  your guide to the world of Bandcamp